In the game the player controls the protagonist, Lara Croft, from a third-person perspective through five locations: India, South Pacific, London, Nevada, and Antarctica. Once the player completes the first location India , the following three South Pacific, London, and Nevada can be played in any order before the final location Antarctica closes the game. Each location features a series of enclosed levels that involve solving puzzles, jumping over obstacles, and defeating enemies.

Although this adds to the realism of the game, archaelogists shouldn't expect to follow bright neon signs reading, "This way to treasure! In my book, implementing too many mazes in a game merely hides a weak game-designing mind. Traditionally, the Tomb Raider series was never about this nonsense.

You knew more or less where to go and you could see where you wanted to go. The puzzle was how to get there, which usually made for some very interesting gameplay. You want more irritating gameplay? You got it. The programmers have implemented new lighting and shading techniques which make the graphics dazzling, but the gameplay crap. This game is dark, folks. There's about twice as much darkenss as in the first two installments, and the flares last about half as long.

Every single crucial item, switch, or path is shaded so heavily Lara could literally stand right next to it and you won't see it unless you light a flare. Maybe Lara should invest in a flashlight. Just for the record, hiding things in obscurity instead of putting in some real creativity and effort in the game design is a big cop-out.

Can you picture yourself enduring heavy eye-strain, searching every inch of every level with pathetically short-lived flares? If you can, you'll be wearing Coke-bottle lenses by the end of the third level. I guarantee it. I've never been a big fan of the camera in any of the Tomb Raiders, but this one's by far the worst. Obstructions between Lara and the camera happen way too frequently and at inappropriate times.

In one area, Lara has to outrun a boulder in darkness, of course and jump over a pit of spikes at the bottom of the hill. Naturally, the boulder is between Lara and the camera the whole time. 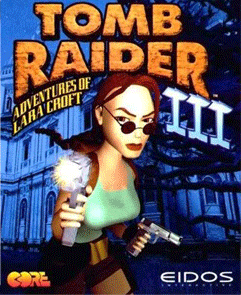